HARRISBURG, Pa. (April 11, 2021) –– A Pennsylvania Health Care Association (PHCA) survey of its members revealed nearly 60% of respondents have declined potential new admissions due to workforce shortages. Providers shared the average amount of referral declines per facility was 20 per month from December 2021 through February 2022, as a direct result of not having enough staff to care for new residents. 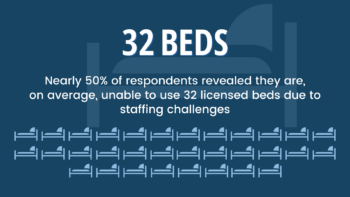 The digital survey conducted in March — a snapshot of the state of long-term care in Pennsylvania — was issued to better understand concerns surrounding access to care for Pennsylvania residents after an outcry in January and February from hospitals over capacity issues and an inability to discharge patients to nursing homes. PHCA’s survey discovered that nearly half of the survey respondents have, on average, 32 licensed beds that are available but unable to be staffed.

“Last October, we knew our providers were in the midst of a workforce crisis after our first member survey revealed a nearly 20% loss in caregivers since the start of the pandemic,” said Zach Shamberg, president and CEO of the Pennsylvania Health Care Association. “But not until today did we really understand the impact of the workforce crisis, and the detrimental effect it is having on Pennsylvania seniors and adults with disabilities in need of skilled nursing care. The impact of declined admissions in nursing homes will be felt throughout the commonwealth’s communities and the entire health care continuum.”

Of the referrals that have been admitted, more than half of survey respondents said residents are traveling farther distances to be admitted for care compared to last year. Twenty percent of the respondents revealed new admissions are traveling 21 or more miles to receive care.

The Bureau of Labor and Statistics reported 2,500 jobs were vacated in U.S. nursing homes during March, totaling 241,000 jobs lost since February 2020. Long-term care as a whole has not seen employment levels this low since 2007. 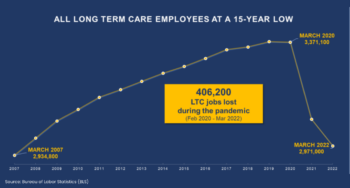 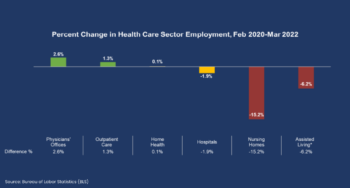 “For nearly a decade, Pennsylvania’s elected officials have failed to make meaningful investments in the state’s Medicaid program, which is directly tied to the care of tens of thousands of nursing home residents. That failure has created the situation long-term care finds itself in today,” said Shamberg. “Providers can’t recruit and retain enough workers because they’re unable to properly invest in their staff. Now, they’ve been forced to diminish their mission of caring for others because their workforce has been lured away to other high-paying jobs. With an insufficient Medicaid reimbursement, providers can’t compete for workers, and if they try, they jeopardize the operational viability of their facility.”

PHCA is actively advocating for a Medicaid reimbursement increase in this year’s state budget to allow providers to increase wages, recruit more caregivers and invest in the infrastructure necessary to provide care.

On Tuesday, April 12, PHCA will testify before the Pennsylvania House Aging and Older Adult Services Committee regarding the workforce challenges in long-term care. The hearing starts at 9:30 a.m. and will be streamed.

PHCA’s survey report can be viewed here or below. 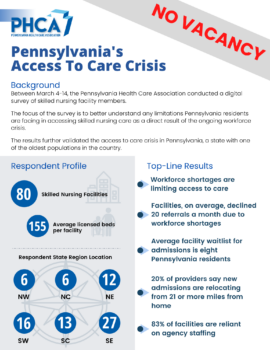 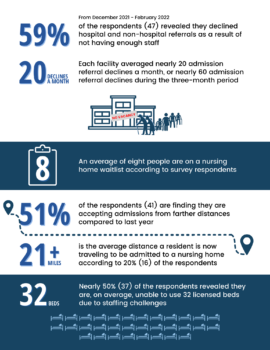