Harrisburg, Pa. (March 1, 2022) –– The Pennsylvania Health Care Association – a statewide advocacy organization representing Pennsylvania’s most vulnerable residents and their providers of care – has issued the following statement in response to newly-proposed nursing home reforms and regulations from the Biden Administration. President Joe Biden is expected to address these misguided and ill-timed reforms during tonight’s State of the Union address.

This statement can be attributed to Zach Shamberg, president and CEO of the Pennsylvania Health Care Association:

“Evidently, the resiliency of our frontline caregivers in nursing homes –– the same men and women who have sustained care for their vulnerable residents during two tumultuous years of the COVID-19 pandemic, all while governing bodies have been slow and reluctant to provide necessary support –– hasn’t been enough to earn the respect of President Biden and his administration.

“Instead, nursing home providers that serve the needs of our parents and grandparents merely serve as a punching bag for the Biden Administration as they deliver a new blow to a critical component of the healthcare continuum –– a sector that also happens to be one of the most regulated and transparent.

“Ahead of the President’s State of the Union address, the White House has announced ‘new reforms’ for nursing homes, when in reality this is yet another attempt to undermine the care offered to millions of Americans –– and the care sought after by thousands more who can’t access it due to workforce shortages and inadequate funding streams. It has been no secret that this administration has made it its mission to dismantle nursing homes, in favor of alternative options. This comes at a time when state leaders, hospitals and providers are trying to find ways to expand much-needed access to around-the-clock nursing care for patients waiting in hospitals and at home.

“The President’s backward attempt at improving care will do nothing more than prohibit seniors from actually receiving the care they need. Long-term care providers need support and long-overdue investments in funding; instead, they’re being handed out-of-touch regulations that are wrapped in selective pandemic statistics to distract and mislead the public for approval.

“We are facing the greatest workforce crisis any generation has ever seen, which has led to an unprecedented and alarming access to care issue. But the priority for the Biden Administration is to instead fund surveyors –– not providers –– so they can take action against nursing homes with penalties that would be 47 times higher than what they currently are today.

“I invite President Biden to meet with nursing home administrators in Pennsylvania to learn how many are spending their weekends working in facility kitchens, simply because there are no available cooks or waitstaff; to hear how the family members of our providers and residents  became Temporary Nurse Aides during the pandemic so that they could help provide care in lieu of absent full-time staff; and to discover how providers are on the brink of financial collapse due to outrageous costs for contracted agency staff.

“The long-term care sector will discuss reform, but we must ensure the real issues are being addressed.

“Until we can have a real conversation about what is best for senior care, nursing home providers –– dedicated servants to the most vulnerable residents in their communities –– are left to wonder why the government would rather shut them down than support their efforts.”

Long-term care providers and industry experts recently spoke during a PHCA workforce summit about the current workforce crisis and ways to help address it. You can hear their perspectives — and struggles — here. 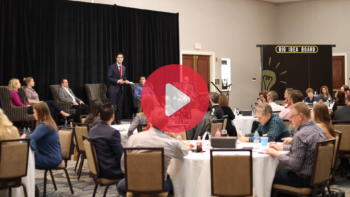