HARRISBURG, PA – A new survey of Pennsylvania skilled nursing, assisted living and personal care providers by the Pennsylvania Health Care Association (PHCA) highlights the fiscal threat to a fragile industry brought on by a relentless and ongoing COVID-19 response.

The survey found that 89% of long-term care facilities are suffering devastating financial hardship while battling the virus, with only 11% saying that their business operations are completely sustainable moving forward. While the survey covered only Pennsylvania institutions, the crisis is clearly nationwide and threatens an industry that has long been underfunded by the Medicaid program. 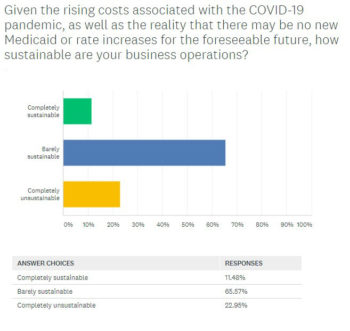 “The long-term care sector provides vital care to the elderly and disabled all across the U.S., though providers, workers and residents have been consistently underfunded by both state and federal governments for decades,” said Zach Shamberg, president and CEO of PHCA. “On any given day, more than 125,000 Pennsylvanians receive care in our state’s nursing homes, and more than 70% of those Pennsylvanians rely on the state’s Medicaid program to pay for that care.”

Most aid to long-term care residents comes from Medicaid, provided only when a person, and often a family, has exhausted all other financial resources. In Pennsylvania, as in many other states, Medicaid funding has remained flat in state budgets for many years, driving countless long-term care facilities into bankruptcy, reorganization or closure.

The staggering costs associated with COVID-19, including testing, PPE and staffing, represent an unprecedented challenge and will almost surely increase bankruptcy filings without significant intervention or investment by state government.

In PHCA’s recent study, 95% of providers say the COVID-19 pandemic has further affected their ability to keep and recruit qualified staff. 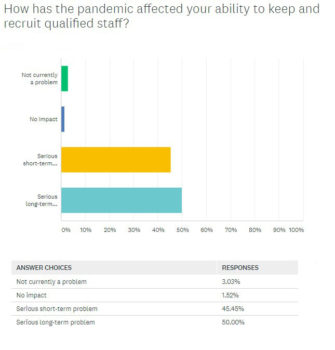 “Delaying or minimizing support for a sector devoted to caring for our most vulnerable populations is unconscionable. In the years following the 2008 financial crisis, studies showed that long-term care bankruptcies increased by more than 30% while overall bankruptcies actually decreased by more than 50%. This current crisis will be far more severe going forward unless legislators act to fix the systemic shortcomings of current state investments and appropriately and adequately invest in long-term care,” Shamberg said.

PHCA has also crafted a plan for government support of Pennsylvania long-term care facilities that could serve as a nationwide model.

Both the plan and the survey data are available at phca.org/COVID19report.

PHCA is a state affiliate of the American Health Care Association/National Centers for Assisted Living, one of the largest associations of long-term care providers in the United States, and has more than 400 member companies in a state with the nation’s third-largest elderly population.

The Pennsylvania Health Care Association (PHCA) is a statewide advocacy organization for Pennsylvania’s most vulnerable residents and their providers of care. Our members include for-profit and nonprofit skilled nursing facilities, personal care homes and assisted living residences. Together, we represent more than 500 long-term care and senior service providers and more than 50,000 elderly and disabled individuals. For more information, please call 717-221-7935 or visit phca.org.

PHCA has endorsed APPI Energy to provide data-driven procurement solutions that reduce and manage electricity and natural gas supply costs for members on an ongoing basis. Every day, APPI Energy identifies the wide range of energy supplier prices across the U.S., and utilizes that data to provide the lowest prices available among many vetted, competing suppliers. Our holistic energy management services include efficiency and sustainability consulting related to demand-side management and renewable energy projects.