Harrisburg, PA (July 11, 2022) — Pennsylvania’s push to prioritize long-term care in the 2022-23 state budget has resulted in a historic commitment to the essential care of more than 110,000 seniors and adults with disabilities — particularly 45,000 who are reliant on state Medicaid funding.

After nearly a decade of stagnant Medicaid reimbursement rates, leaders in the House and Senate and Governor Tom Wolf have officially prioritized long-term care with a recurring Medicaid investment, as well as American Rescue Plan (ARP) funding to help deliver an immediate lifeline to providers (see budget details outlined below).

“This investment — a direct result of the entire long-term care sector, as well as state leaders, working together — helps better position Pennsylvania to ensure continuity of care for tens of thousands of vulnerable senior citizens,” said Zach Shamberg, president and CEO of the Pennsylvania Health Care Association. “For months, we have asked, ‘Who Will Care?’ Today, seniors and adults with disabilities should find comfort in knowing that Pennsylvania cares.” 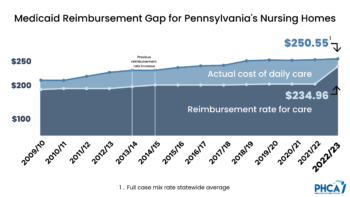 Nearly 1.2 million Pennsylvanians are expected to need long-term care services in the next 20-30 years, with an anticipated increased reliance on Medicaid to fund the cost of that care. This year’s 17.5 percent investment in Medicaid reimbursement for nursing homes will increase rates by approximately $35 per resident per day. This will empower long-term care providers to invest in workers with higher wages and benefits, recruit more workers to the frontlines and meet the demand of today’s operating environment.

“Every day, families across Pennsylvania are feeling the financial stresses caused by inflation and added costs. Long-term care providers are dealing with those same pressures in a 24/7 health care community, especially when their primary source of funding has been an insufficient Medicaid reimbursement,” Shamberg continued. “Many of our nursing home providers have questioned their own sustainability — especially throughout the past two years. With this historic investment, these providers will be afforded the opportunity to fulfill their mission of caring for others. This is truly a victory for hundreds of long-term care providers, as well as tens of thousands of caregivers and residents throughout the commonwealth.”

Along with increasing the state’s Medicaid reimbursement rate for the first time since 2014, the legislature and governor have also agreed to allocate more than $157 million of the remaining American Rescue Plan Act (ARPA) funds to nursing homes, assisted living communities and personal care homes. PHCA first advocated for the release of these funds in December 2021, to reward caregivers that have continued in their profession and to help providers meet rising costs.

Nearly 20 nursing homes have closed or announced plans to close since the start of the COVID-19 pandemic. A consistent driving factor for the closures has been an inadequate reimbursement rate as costs for care soar. PHCA reported in June that nearly 60 percent of all Pennsylvania nursing homes have been categorized as, “facilities at financial risk.” This year’s state budget will help sustain operational viability.

The Pennsylvania state budget investments for long-term care include:

The total additional funding allocated for long-term care for the 2022-23 budget cycle –– including federal matches –– is about $515 million.

Increased Medicaid reimbursement rates will take effect in January 2023, and ARPA funds are expected to be allocated in the coming months. 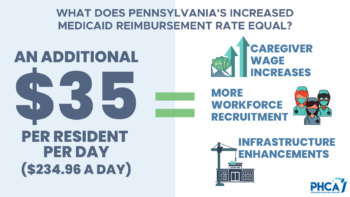 The legal needs of healthcare are inconstant so it??s important to seek legal representation with experience. Hynum Law represents nursing and PCH facilities regarding collections, Medicaid eligibility, guardianships, compliance programs, contracts, licensure and survey appeals, human resources, reimbursement and payment appeals. Attorney Michael Hynum obtained NHA licensure in 1993 and served as a Nursing Home and Personal Care Home Administrator for many years. Combined, the attorneys at Hynum Law have over 40 years of experience.