Additional costs have also come in the form of increased worker wages and contracting with expensive temporary staff to fill open shifts. Since 2020, wages for Pennsylvania nursing staff have increased by an average of 9 percent for registered nurses (RN), licensed practical nurses (LPN) and certified nurse aides (CNA), according to data gathered by Health Management Associates from the Bureau of Labor Statistics. 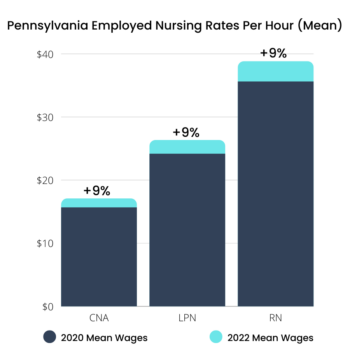 The Health Management Associates (HMA) conducted an impact analysis on the staffing crisis in Pennsylvania nursing facilities. The report concluded Pennsylvania Medicaid reimbursements have not kept pace with rising costs, staffing shortages have been exacerbated during the COVID-19 pandemic and there is an emerging need for nursing care due to a rapidly aging population. HMA also looked at the Pennsylvania Department of Health’s proposed increased staffing requirement. The analysis confirms an additional 10,000 workers would be needed (including employee turnover) for providers to staff at current census levels. The analysis also estimates the cost to fulfill this requirement is $444 million more than the state’s proposal of $90.1 million.

“We can’t overstate how alarming the financial situation has become for long-term care in Pennsylvania,” said Zach Shamberg, president and CEO of the Pennsylvania Health Care Association. “Years of insufficient funding for tens of thousands of seniors who rely on Medicaid has led to this crisis. Long-term care providers are voicing their concerns with state leaders in Harrisburg, calling on those leaders to prioritize funding for senior care in this year’s state budget. If Pennsylvania fails to act, hundreds of nursing homes will not just be ‘at risk’ of closing; rather, tens of thousands of our vulnerable seniors across the commonwealth will be ‘at risk’ for not receiving the essential care they need.” 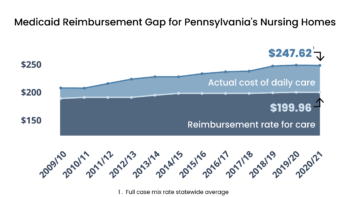 PHCA is advocating for a $294 million increase in the state’s Medicaid reimbursement rate to support employee wages, workforce recruitment and operational costs. Since the start of the COVID-19 pandemic, Pennsylvania has had a net loss of more than 10 nursing homes, including a specialized ventilator facility as a direct result of Medicaid underfunding. Without investments in the 2022-23 state budget for long-term care, more closures are expected to occur.

PHCA has endorsed APPI Energy to provide data-driven procurement solutions that reduce and manage electricity and natural gas supply costs for members on an ongoing basis. Every day, APPI Energy identifies the wide range of energy supplier prices across the U.S., and utilizes that data to provide the lowest prices available among many vetted, competing suppliers. Our holistic energy management services include efficiency and sustainability consulting related to demand-side management and renewable energy projects.